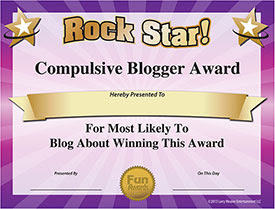 Durham, NC (PRWEB) -- Know someone who's addicted to blogging, MySpace, Twitter, or Facebook and want to rub it in a little? Give them a funny award. Corporate comedian Larry Weaver has several awards for the geeks who can't get enough online socializing. The awards are professional and can be printed out at home. They're also budget-friendly -- free.

"We all know people who are addicts - to blogging, Facebook, and other online sites. They are updating their Facebook page while you're talking to them. You have to watch what you say or they'll blog about it. My social media awards are free. Printed one off at home, frame it, and put under the tree for a good laugh this Christmas," said Weaver -- who is a blogger himself.

The funniest part of social media addicts is how seriously they can take themselves. Help them see how funny that is.

Here's a sample of the funny awards:
The social media awards acknowledge these time wasting afflictions that a portion of the population suffers from. Make up your own version with Weaver's new eBook (the addicted to eBooks award is coming soon). There are blank awards that can be customized to give to other time wasters, avoiders, and the other characters we encounter in life.

Feel free to blog about these awards or frame them and hang them at work. Just be careful - or the next award could be given to you!

About Larry Weaver and 101 Funny Employee Awards
"Funny Employee Awards: Your Complete Guide to Organizing a Humorous, Entertaining, and Rewarding Recognition Ceremony" was written by Larry Weaver. After sitting through some of the most boring pompous awards ceremonies possible, Weaver decided to help people out. The book has printable awards and tips for making awards ceremonies an entertaining and bonding experience. Weaver has been on numerous television and radio shows and books corporate comedians. He's been on stage with "Weird" Al Yankovic, and has three CDs of funny songs and commercial parodies.

BTW, keep track of all the newest funny awards news, by following Weaver on Twitter @larryweaver.
Posted by Larry Weaver at 9:00 AM

Email ThisBlogThis!Share to TwitterShare to FacebookShare to Pinterest
Labels: social-media-awards